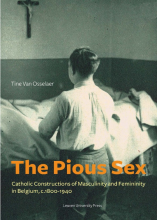 The Pious Sex. Catholic constructions of masculinity and femininity in Belgium, c. 1800-1940

Although women were called the “pious sex” much earlier, it was during the nineteenth century, when the differences between men and women were being made more explicit, that an intense bond between women and religion was developed. Religiosity was thought to be a “natural” part of femininity and turned religious masculinity into an oddity. 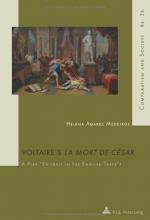 In the preface to La Mort de César (1736), Voltaire claimed to have written a tragedy inspired by Julius Caesar that, while not resembling Shakespeare’s play, was «entirely in the English taste». Such a claim has so far gone virtually unnoticed in scholarly circles, despite its intriguing nature. Furthermore, La Mort de César is commonly referred to as a cornerstone in the European reception of Shakespeare’s drama even though, according to Voltaire, his play was far removed from the barbaric, tasteless and therefore «untranslatable» Julius Caesar.

The texts edited in this volume deal with angelology and anthropology, and particularly with the nature and the functions of immaterial substances like angels and the human rational soul. Marchia discusses such controversial issues as universal hylomorphism, i.e., whether angels and the rational soul are composed of both matter and form (q. 13), the immortality of the soul (qq. 18-19), and the nature and the object of the intellect and will (qq. 20, 21), as well as the functionality of the angelic intellect - whether angels understand through discursive reasoning (q.